What follows are an AOMA students comments on my Wiki Qi blog, and my response to him. I'm re-posting as a blog because the way comments are formatted you can't easily see them. Here goes:

I have read your blog in reaction to the “Wiki Qi group” at AOMA and I was surprised to read such strong opposition from a man who wants to make acupuncture more affordable to the community. I don’t know who our Wiki Qi group is but I felt it was a courageous step in addressing this increasing gap between loan distributions, education costs and costs of living. I would agree that some points could have been addressed differently. There was a great deal of passion present in that email as there is here in your blog. Opinions around finances in the world today are an increasingly tender spot , as making ends meet has become a little harder. This is why your service at South Austin Community Acupuncture is so important.

The student is the end of the chain when finances are tight. The teachers desire more money, the book authors desire more money, the administrators seek more money and so there is a need to increase profits yearly to keep this cycle going. But the government is not giving students more money and so what is left over to live with is getting smaller and smaller. The School (as you will recall) recommends that full time students do not work because of the demands of full time education. Therefore, many students, as you apparently did, take the full amount allowed. After purchasing books, supplies, rent, food, utilities, gas, etc there is not a lot of wiggle room and for some it will not even cover that much. Where are the students to come up with the financial backing for these increasing costs?

You point out that it’s only a 3% increase in several places in your blog as if it’s too small amount to fuss over and yet just recently UT students faced a 2.6 % increase and said enough is enough and it looks like the students have won. The school will come to the decision this week. All of these seemingly small increases are adding up. There are other places to cut costs. And this does not need to be a cut to teachers or staff but perhaps a freeze on income. If no one got a raise next year it might balance out. The staff then, as well as the students, would need to find a way to be more efficient. Student loan distributions have not had a raise in a while after all. When students get a raise, the financial award can get passed up the chain.

This would possibly have an effect on your girlfriend’s income, who is employed at AOMA and I have to wonder if this is why you are so incensed by the student movement as you are not entirely neutral to the effects this might have on you. We are all personally affected by these changes.

I respect Wiki Qi’s opinions and call to awareness and in fact I respect your opinions too Wally. I would add that both you and Wiki Qi could work a little on how your tone and choice of words may not be doing justice to the points which you are trying to make. If we can work through the oppositions we might come to some agreements.

Jan 6, 2012 10:19 AM
Hi Jason,
Thanks for your input.
I actually thought that relative to some of the stuff Wiki Qi wrote what I said was pretty measured.
I spoke up about Wiki Qi’s email because I thought it was presumptuous and disrespectful to the point of just being dumb. Regarding some of the points you make:
First of all, you say that I “point out that it’s only a 3% increase in several places as if it’s too small amount to fuss over” when actually, not once was this the point I was making. My point was not to be dismissive of the amount or effect of the tuition increase, my point was to address Wiki Qi’s reaction to it - which was pretty over the top.
Having said that, I’m not sure what catalog you are under, but the 2011 – 2012 catalog states the following: “AOMA reserves the right to make tuition adjustments of 4-8% per year that reflect changes in the cost of living and cost of education, subject to governing board approval.” These are the terms you have agreed to by undertaking a program under a given catalog. So yeah, I guess you could say it was only 3%.
The overarching theme of Wiki Qi’s message seems to be that the AOMA administration is irresponsible and incompetent, and that the students bear the brunt for this. I don’t agree with this. I understand it’s hard financially to be a student, and there have been a lot of big changes at AOMA recently, but come on…
It's easy to write a bunch of reactive bs (anonymously no less) about the "school" and the "administration” as if you are writing about a thing rather than actual people. I don’t find it to be particularly courageous or constructive. For me the people that make up AOMA are my friends, colleagues, teachers, and yes – one is my girlfriend. And from what I can tell, they are a fairly capable bunch doing good work with a high level of integrity.
I don’t really know how to respond to your musings about my girlfriend’s income and my neutrality or lack thereof, other than to say yes, my girlfriend is the Director of Finance at AOMA, and no, cost cutting measures that affect her income do not make me angry. Otherwise you’re kind of into the realm of the hypothetical. I didn’t know about “the student movement” for instance.
Regarding your being “surprised to read such strong opposition from a man who wants to make acupuncture more affordable to the community”, I can’t say I follow your logic. I honestly don’t know that there is any correlation between the cost of treatment and the cost of education – if that’s what you are getting.
When I went to school, then president Jim Coombes pretty much made it clear that this was adult education, and that we needed to take responsibility for our choice to be there. He made it clear there were no guarantees of success and encouraged us to borrow as little as we could. So work part time if you need to. My girlfriend did the whole time she was in school.
The cost of education, and the state of acupuncture in the US are complicated issues and my thoughts and opinions about these topics don’t fit neatly into one camp or another. Nor do I see any easy solutions. While the disparity between the cost of an acupuncture degree and the earning power of that degree is a real issue for many, I don’t think acupuncture schools are out to screw you. And yes, if you borrow all the money you can you are going to graduate with a whole lot of debt and be entering a field where you are pretty much on your own. It is something to think about. Most people don’t really think about it I suspect.
Posted by Wally at 12:00 PM 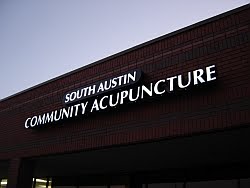